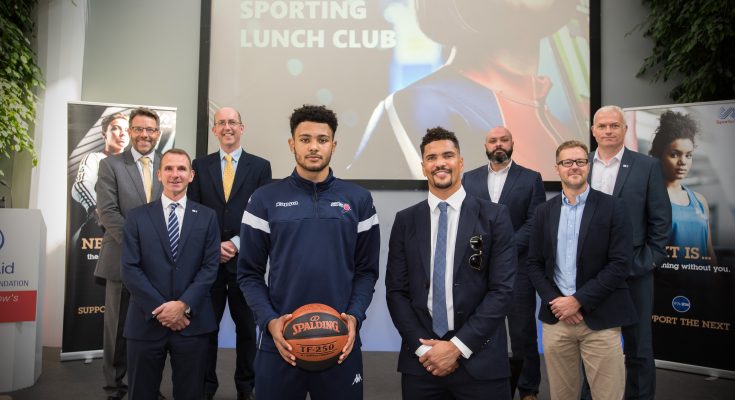 Ogogo, who won a bronze medal at the London 2012 Olympics, was guest of honour and headline speaker at an Ipswich Sporting Lunch Club event at Wherstead Park.

He said “To see so many members of the local business community come together with a shared ambition of helping young, local athletes to succeed is fantastic. I know first hand what a difference their support makes and, on behalf of the many, many athletes that SportsAid supports, I’d just like to say a big thank you to them all”.

The Ipswich Sporting Lunch Club was set up in January 2015 to raise money for SportsAid, the national charity for sports people, to enable them to support talented up and coming sportsmen and women from the county. SportsAid works with the governing bodies of 75 sporting disciplines, to ensure the right athletes get financial support and recognition at the right time.

David Collins from Pound Gates said “We don’t want to see young talented athletes from Suffolk dropping out because of lack of funding. You only have to look at what an inspiration a local lad like Anthony is to realise that how important it is to help and support them. It creates a great sense of pride when you have successful sportsmen and women in the local community. As local businesses we believe it’s important to support the local community and by helping SportsAid we’re doing just that.”

Andy Smith from Strategic added “Anthony had a fascinating story to tell. To hear the highs and lows of his career really puts in to perspective the will, desire and mental strength it takes to be a world class athlete. We hope that through the Ipswich Sporting Lunch Club we can do our bit to help other young people from Suffolk reach the top of their sports.”

Ogogo, who is currently starring in Celebrity Island with Bear Grylls’, also took the opportunity to present a SportsAid grant to 16-year-old basketball star Veron Eze from Ipswich.

Eze is a Great Britain international and has recently returned from the European Championships where he helped GB to victories over Ireland, Luxembourg, Portugal, Sweden and Romania.

After receiving his grant Veron commented “I am so grateful to SportsAid for their support. It’s great to be recognised for what I have achieved so far. Ultimately, my ambition is to win a scholarship to play basketball in the United States and then play in the NBA. The funding I’ve received today will really help me with the costs of training and competing at the right level.”

The event is expected to have raised in excess of £10,000 for SportsAid with every penny going to support young sportsmen and women from Suffolk.

Before they become a household name, an elite sportsman or woman will spend 100,000 hours and thousands of pounds pursuing their dream. Many are forced out long before it comes true.

SportsAid makes it possible for young athletes to pursue their dreams, so that – like 18-year-old Steve Redgrave in 1980 and 13-year-old Kelly Holmes in 1983 – they can one day go on to inspire a nation.

At London 2012, almost two-thirds of the British team were former recipients of SportsAid’s support, winning 20 Olympic and 27 Paralympic gold medals between them. For many, SportsAid were their only means of support at a crucial, early time in their career, before other sources of funding are available. SportsAid continues to work with the governing bodies of 50 disciplines to ensure the right athletes receive support.

Suffolk SportsAid was established in 2007 as a legacy from the London 2012 Olympic and Paralympic Games, to support individuals with cash awards in the defining early years of their careers.  Since it was launched the Foundation has made in excess of 200 grants to talented athletes from Suffolk distributing over £175,000.  The Foundation is proud to have supported six of Suffolk’s London 2012 participants including both medallists (boxer Anthony Ogogo and powerlifter Zoe Newson), Glasgow 2014 Commonwealth Games medallists Chris Walker-Hebborn and Harry Martin and all Suffolk’s representatives at the 2016 Olympics and Paralympics.