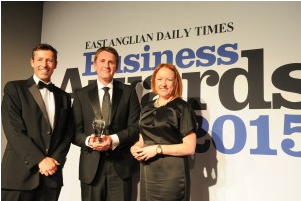 We are delighted to have been awarded the 2015 East Anglian Daily Times Business Award for Community Involvement. Directors Rob Thacker and Del Sharman received the award on 9th July 2015 from Emma Hibbert of Adnams, the award sponsors.

The Community Involvement award recognises commercial businesses than can demonstrate how they combine business success with involvement in their community, in ways which go beyond their core business strategy. The judges were particularly looking for evidence of a business that had shown;

In choosing us as this year’s winners, the judges commented “Having also been a finalist last year, Pound Gates really impressed the judges with how much they had progressed their community involvement activity. Pound Gates employees visibly live the values, at work and at play. They demonstrated clarity of focus on why they get involved in such a wide range of community activities and there is clear and inspirational leadership from the senior management team on the importance of being good citizens. Congratulations Pound Gates.”

We are really pleased that our “Doing Good” ethos (as we would call it) has been recognised in this way. The award reinforces our approach to balance our desire for business success with the needs of the wider communities in which we are active and acknowledges the efforts of all our team that have played a part in the wide variety of causes we have supported over the last 12 months.

On the evening of the awards we shared the table with runners-up PPG Industries and Observatory the Opticians, both of whom we would like to congratulate.