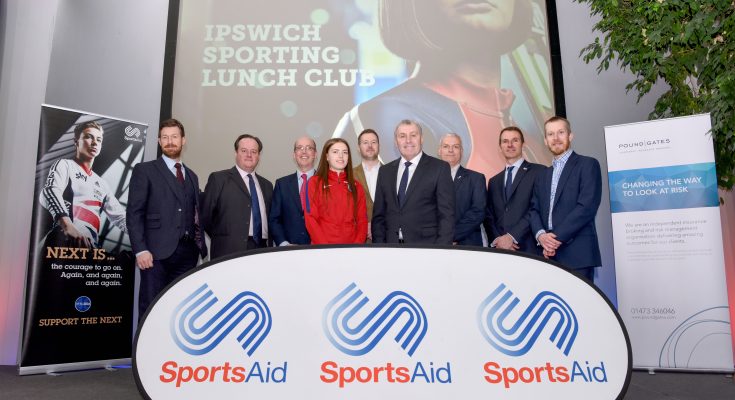 Shilton who was capped 125 times by England was guest of honour at the Ipswich Sporting Lunch Club at Wherstead Park.

He said “It’s wonderful to see the local business community coming together to raise money for up and coming sportsmen and women. It has been a real privilege to be here and meet representatives of the businesses behind the club. I know it’s making a real difference to the lives of young sportsmen and women across Suffolk.”

The Ipswich Sporting Lunch Club was set up in January 2015 to raise money for SportsAid, the national charity for sports people, to enable them to support talented up and coming sportsmen and women from the county. SportsAid works with the governing bodies of 75 sporting disciplines, to ensure the right athletes get financial support and recognition at the right time.

Malcolm McGready from Ensors Chartered Accountants said “On behalf of the businesses behind the Ipswich Lunch Club I would like to thank Peter for supporting today’s event. To have somebody of his stature involved, with everything he has achieved in football, is fantastic. Importantly, what it does, is enable us to raise even more money for SportsAid in Suffolk and that, ultimately, is what it’s all about”.

Eaton Collins plays for Arsenal Women and has represented England at under 15, under 17 and now under 19 level although she is still only 17 years old. Despite her tender age she has already played against some of the powerhouses of world football including Germany, Italy, France, Mexico and Russia. Her current aim is selection for the England Women Under 19’s team taking part in the European Championships in Switzerland in July.

After receiving her grant Georgia commented “I am so grateful to SportsAid for their support, it really does make a world of difference to me. And for my grant to be presented by Peter Shilton makes it even more special.”

The event is expected to have raised in excess of £10,000 for SportsAid with every penny going to support young sportsmen and women from Suffolk.