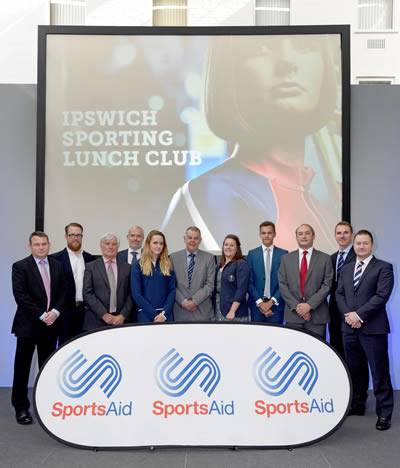 Ipswich businesses came out in force today to demonstrate their support for the next generation of sportsmen and women from the county.

A capacity audience of 240 people descended on Wherstead Park near Ipswich for the inaugural Ipswich Sporting Lunch Club event keen to raise money for SportsAid, the national charity for the rising stars of British sport.

Led by event sponsors, Pound Gates Chartered Insurance Brokers, Crafted, Ensors Chartered Accountants, Handelsbanken, Ellisons Solicitors, Corbel and the Suffolk Institute of Directors, the club has been established to raise vital funding to help young sportsmen and women from the county overcome the financial challenges they face as they bid to become Britain’s next generation of Olympians and Paralympians.

Former England cricketer and current sporting speaker of the year Geoff Miller was guest of honour at the lunch. Miller spent 20 years on the professional cricket circuit, representing Derbyshire, Essex, Natal and England. He was also appointed National Selector by the England and Wales Cricket Board in 2008.

Sherwin represented Team GB at the inaugural European Games in Baku, Azerbaijan earlier this year winning bronze in the 4 x 100 metres medley relay final and qualifying for the final of the 200 metres women’s backstroke.

Rob Thacker from Pound Gates Chartered Insurance Brokers, speaking on behalf of the seven founding businesses behind the Ipswich Sporting Lunch Club, commented “We are delighted how the Ipswich business community has really taken the Ipswich Sporting Lunch Club to their hearts and turned out in such big numbers. With their help and support we can make a real difference to aspiring young Suffolk sportsmen and women like Rebecca.”

Chief Executive of SportsAid Tim Lawler added “I really do commend the businesses behind the Ipswich Sporting Lunch Club. Their drive, enthusiasm and generosity is superb and thanks to their fantastic efforts we will be able to support more aspiring sportsmen and women from Suffolk on their journey to national and international honours. Every penny we raise in Suffolk stays in Suffolk to support young people from Suffolk.”

Lawler was also keen to point out that SportsAid has a track record of supporting the right athletes at the right time. Almost two-thirds of the British team at the London 2012 Games were former recipients of SportsAid’s support winning 20 Olympic and 27 Paralympic gold medals between them.

Suffolk’s London 2012 Handball star Louise Jukes, who is also a former recipient of SportsAid’s support, said “I couldn’t have achieved what I did without SportsAid funding. They helped me at a vital time in my career which ultimately enabled me to go on and represent Suffolk and Team GB at the London Olympics. I would like to add my thanks to everybody who came along today, their support really does make a huge difference.”

The Ipswich Sporting Lunch Club will raise money by hosting two business lunches each year. Each lunch will be open to any local business and will provide good sporting speakers, a great atmosphere and a wonderful networking opportunity. The next lunch event will take place on Friday 26th February 2016 at Wherstead Park when one of the UK’s best known and most popular sportswomen, Sharron Davies MBE, will be guest of honour. Full details can be found at www.ipswichsportinglunchclub.co.uk.