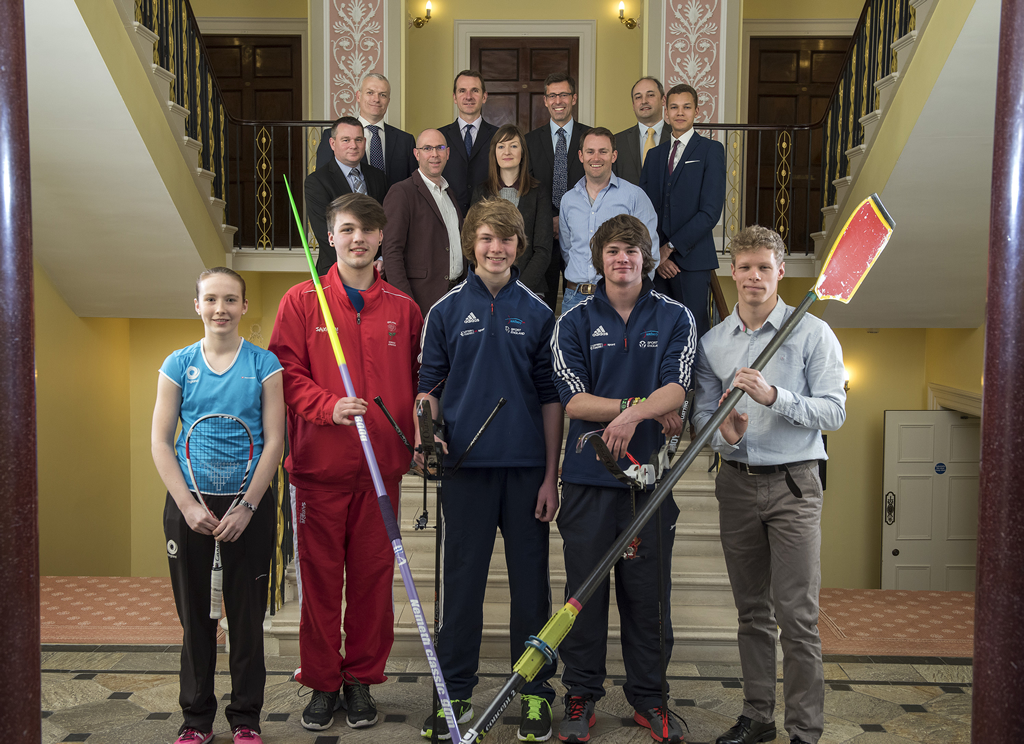 Seven local businesses have joined forces to establish an Ipswich Sporting Lunch Club to raise vital funding to help young sports people from the county overcome the financial challenges they face in their bid to become Britain’s next generation of Olympians and Paralympians.

The businesses – Pound Gates Chartered Insurance Brokers, Crafted, Ensors Chartered Accountants, Handelsbanken, Ellisons Solicitors, Corbel and the Suffolk Institute of Directors – have teamed-up with SportsAid, a national charity dedicated to helping the next generation of British sports stars by giving them financial support and recognition during the critical early years of their careers.

Over four decades, SportsAid has raised and donated more than £50 million to the future of British sport, helping many of the country’s best known sporting heroes to achieve their ambitions. So successful have they been in supporting the right athletes at the right time that at the London 2012 Olympic and Paralympic Games, almost two-thirds of the British team were former recipients of SportsAid’s support. These athletes won 20 Olympic and 27 Paralympic gold medals between them.

Rob Thacker from Pound Gates Chartered Insurance Brokers said “Young athletes with huge potential are at risk of dropping out of their sports because of the lack of recognition they receive and the huge financial pressures they are under.  We want to support these young role models and help them fulfil their potential.”

Pete Tickner from Corbel commented “SportsAid has a fantastic track record of supporting some amazing sportsmen and women. We know that through their links to national governing bodies of sport the money that we raise in Ipswich will get to the right athletes at the right time.”

Brad Warwick from Crafted said “The Ipswich Sporting Lunch Club will raise money by hosting two business lunches each year. Each lunch is open to any local business and will provide good sporting speakers, a great atmosphere and a wonderful networking opportunity.”

The inaugural lunch will be held at Wherstead Park on Thursday 24th September with special guest Geoff Miller, OBE. Geoff Miller is a former England Test cricketer, having played in thirty four tests and twenty five one day internationals for his country and England Selector. He is arguably the best cricket raconteur and his timing and stories provide great entertainment for cricketers and non-cricketers alike.

Barry Gostling from Ensors Chartered Accountants said “We are delighted that Geoff Miller has kindly agreed to be our guest speaker. It’s a real coup to attract a speaker of his calibre given his recent recognition as 2014 Sporting Speaker of the Year. As a former England Selector, his views on current matters on and off the field are eagerly anticipated.”

Martin Fish from Handelsbanken added “SportsAid is a very worthwhile charity and I would urge local businesses to join us and help support more young athletes from Suffolk. All the necessary details can be found at www.ipswichsportinglunchclub.co.uk.”

To mark the launch of the Lunch Club, representatives from each of the seven founding businesses were joined at Wherstead Park on 31st March by five young up and coming athletes from Suffolk. Each athlete was presented with a SportsAid grant in recognition of their achievements to date and potential to progress and compete at the very highest levels in the future.

Julian Outen from Ellisons Solicitors said “I would like to congratulate these young athletes on their achievements to date. They all have truly inspiring stories to tell. I’d also like to wish them well for their future sporting careers, we will be following their progress with interest.”

Luke Morris from the Suffolk Institute of Directors added “As in business, for the young athletes that SportsAid supports it takes commitment and hard work to succeed. These young people are fantastic role models and all the businesses involved in the Ipswich Sporting Lunch Club are delighted to be able to help support them on their journey to national and international honours.“